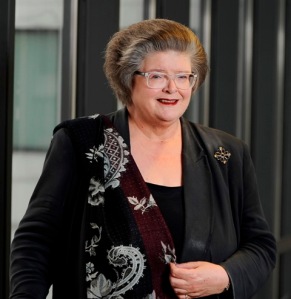 The 2014 General Meeting voted unanimously to name Alyson Bailes the first Honorary Member of Nexus. The outgoing Board nominated her in recognition of her tireless work in establishing Nexus, and her continued support of the forum throughout its existence.

Alyson is an Adjunct Professor at the University of Iceland (since 2007) and Visiting Professor at the College of Europe, specializing in security studies. She was formerly a British diplomat for over thirty years, and a Director of the Stockholm International Peace Research Institute (SIPRI). Her main current research work is focused on Nordic and Arctic affairs, ‘small states’, and the Scottish independence debate.

See our Facebook page for pictures of the award ceremony. For further information about Alyson Bailes, see her staff page of at the University of Iceland.